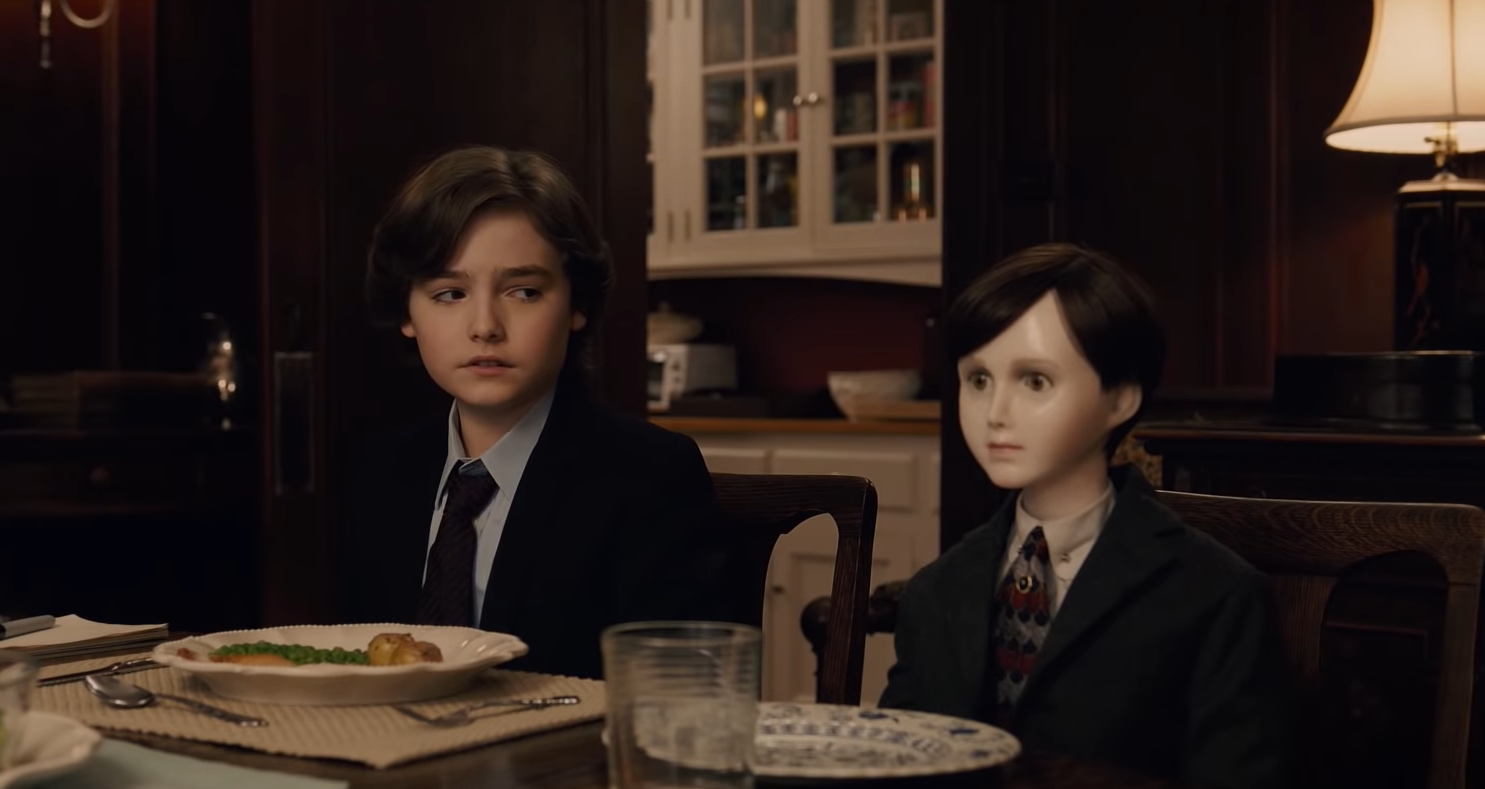 The third act twist of 2016’s The Boy ripped the rug out from under viewers with the reveal that porcelain doll Brahms wasn’t a haunted entity but a mere stand-in for the fully-grown madman living within the walls of the Heelshire mansion. Greta’s (Lauren Cohen) dawning horror at the realization that the mischievous pranks played upon her weren’t at the hands of a frisky child ghost but the bearded, masked adult busting through the walls delivered a thrilling jolt, even when the clues were there all along. As effective and enduring as the twist was, it punctuated the film in such a way that it makes it difficult to conceive of where a sequel could go from there. Now that we know Brahms’ secret, are there any surprises left?

This was the biggest question hanging overhead when stepping on set of Brahms: The Boy II. With much of the crew returning, including screenwriter Stacey Menear and director William Brent Bell, producer Gary Lucchesi tiptoes around how this sequel will keep fans in the know engaged. “Well, we can’t have a guy in the wall again. That was great; it was one of the reasons we made the movie. This movie is more grounded in some ways,” he told us, adding, “It’s challenging. We’ve cast this guy who you think is the caretaker of the Heelshire estate, but you find out later that he’s more. It’s an actor by the name of Ralph Ineson. Ralph Ineson was the guy in The Witch; he’s fantastic. He’s great. So, there are surprises with him. And there are all sorts of surprises at the end.”

As for the premise, this sequel begins with a harrowing home invasion while Liza (Katie Holmes) is home alone in London with her son Jude (Christopher Convery). The event leaves them both traumatized; Liza suffers nightmares and Jude has become sullen and mute. Her husband whisks them away to the countryside to heal, and the cottage he’s chosen happens to be part of the Heelshire estate – unbeknownst to the family, of course. Because of this, a family stroll one afternoon leads Jude to the discovery of a porcelain doll buried in the dirt. It’s Brahms. The mystery of how he got there is only one of many; Jude’s new obsession with new companion doll Brahms breaks him out of his shell, but his behavior grows increasingly bizarre.

If it wasn’t immediately clear, this sequel doesn’t pick up immediately after the events of the first film. Production designer John Willet, also returning from The Boy, gives insight to the passage of time between films when sharing how much we can expect to see the Heelshire mansion this go-round, “You see other parts of the house, and the thing is, the first time around we shot a lot of the real Heelshire and I built big sets, including Brahms’ room, for the other action stuff. In this case, the whole conceit is that contractors had been hired 3 years ago to redo Heelshire. And then Joseph [Ineson’s character], who owns the place, was going to put it back on the market, but something happened. We don’t know what, and all the workmen took off. So, when you see Heelshire manor, all of the residue is left; giant scaffolding, plastic blowing off, machines sitting there. A total mess. Same with the inside. We put scaffolding inside and tools all over the place. When you walk in it looks like construction, mid-renovation.” The real Heelshire that Willet is referring to is the Craigdarroch Castle, nestled in the suburbs of Victoria, British Columbia, Canada. Built by wealthy coal baron Robert Dunsmuir in the late 1800s, the striking architecture makes for a perfect horror movie setting.

As with the first film, the doll Brahms will undergo many costume changes. Costume Designer Aieisha Li explains that when Jude first uncovers him in the dirt, he’s been buried in a special 1930s inspired burial suit, “We wanted an idea that he was buried in it, so somebody found the doll and put him in a special burial outfit.” But it’s the details of how she styled the film’s child protagonist Jude that raises eyebrows, “Jude starts off as a fun carefree kid, with graphic tee, and then as the home invasion happens, we changed his look to something a little less fun. As he meets Brahms, we move his costumes to be more Brahms like. And then toward the end, he becomes styled very much like Brahms.” Meaning that it sounds as though Jude will be very much under Brahms’ sway as the movie progresses.

With a larger cast and a setting that expands a bit beyond the boundaries of the Heelshire mansion, we wanted to know what other changes we might expect in this sequel. Director William Brent Bell reflected on a major lesson learned from the first film, “I would say that the jeopardy didn’t exist enough for me, you know. We would have talks about it. It’s a cool movie, it’s great, and cool that we got an opportunity to make a kind of an origin story, in a way. It didn’t have a teaser at the beginning, it just starts right into the story. That’s unique. But for me, there’s a point where he’s doing things; leaving her a sandwich. He might have cut her hair, but we didn’t have that moment. He takes her clothes. They’re all cute little things, but they’re not necessarily deadly. We got to that point later in the story, but I got to the point where I was like, ‘I want to do a second movie where we have stakes where he’s not just being cute and weird; he’s being deadly.’ That’s what we’re doing in this one, I think.”

As for the sequel’s overall tone, he explains, “The first one had a pretty straightforward tone. Kind of a throwback gothic, beautiful almost dreamlike quality. It wasn’t really like the real world, almost. The difference in this, which is cool, is it’s real world people living in a house. They’re a family. We do touch on the mansion, but not to the degree that we did before. It’s in a state of disrepair. In a way, there’s a little more realness to it. We’re keeping a kind of a classic tone, but at the same time we’re raising the stakes and making it more intense than the first one.”

Knowing that the audience already is aware of the truth behind the Brahms’ doll, there’s a question as to whether this sequel will attempt to make the doll creepy again. Bell answers, “There’s only so much you can do to play with people’s preconceived notions of the first movie because you don’t know if they’ve seen the first movie. If they’re coming into this movie, they have to engage in this story. As if they hadn’t seen the first. That kind of plays into it a little bit. For the most part, there’s a quality, like we said, where we’re discovering a doll that’s buried that’s weird, weirder than normal. The movie gets weird pretty quickly because you’ve got this 10-year-old kid that’s walking around with a life-sized 8-year-old doll and there’s just all sorts of wrong with that.” A surprising influence on this sequel is Trilogy of Terror. Bell cites, “That movie was a huge influence on me as a horror filmmaker my whole life. When I saw Trilogy of Terror, and the little Zuni crazy doll, I wouldn’t put my feet down off the couch for, I don’t know how long, four years? If you guys are familiar with that short, it’s amazing. And I’ve watched it since. It’s ridiculous, but it totally works; how intense it is. That movie, to me -Karen Black and how she became evil- was a big influence on this.”

The scene being filmed seems to reinforce what Bell and Lucchesi have been saying; there will be surprises in store. Katie Holmes’ Liza descends down the steps of the Heelshire mansion with a shotgun raised. There’s a creepy lullaby being hummed somewhere in the darkness. She winds her way cautiously through the catacomb-like cellar and eventually finds her son Jude, standing in front of a coal-burning furnace holding Brahms. He’s dressed exactly like the doll.

The lullaby humming no doubt comes from Brahms’ love of music, something established in The Boy. Touring through the set pieces of the cobweb-filled space between the walls of the Heelshire mansion, it’s littered with sheet music and little plastic soldiers. A reinforcement of the real Brahms’ personality and mental state. We also stepped foot into Brahms’ room, now scorched from fire and indicative of the passage of time between films.

Those involved with Brahms: The Boy II are well aware of how the knowledge of the first film’s twist can affect expectations and suspense of a sequel, but adding a larger cast centered around a family in the throes of severe trauma and a caretaker of the Heelshire estate harboring secrets means that there’s more than one mystery at play here. Taking this sequel in new directions means that franchise potential is already being discussed. As for ideas on what a third entry might look like, Bell says, “We have an idea. When you start thinking about the concept of a franchise, it opens up a lot of doors. I feel like a prequel is either the second or third movie. Not that we would do a prequel for the third movie, but that’s typically how it goes. We don’t know yet.” Though whether another sequel will come to pass, you can bet the seeds will be planted in this film, “What’s cool is you have a movie, then you have a button, and a post credits button. Theoretically. So, there’s a couple of spots to put these codas. If people stay through the credits, well there might be one more thing. Who knows where that will lead with the actual next movie. If that even happens. But it’s so fun to play around with. We’ll have that with this one.”

In other words, stay through the credits.