•Katie Holmes, 41, was spotted locking lips on Sunday night with chef Emilio Vitolo Jr., 33, in Manhattan
•On September 1, the pair were spotted enjoying a cozy dinner in NYC
•Holmes was previously married to Tom Cruise, 58, from 2006 until their divorce in 2012
•They share 14-year-old daughter Suri, who currently lives with Katie in New York City
•After that Katie began dating Jamie Foxx, who she was first linked to in 2013
•Katie and Jamie never confirmed their romance and they allegedly put an end to it in 2019 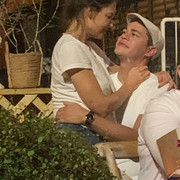 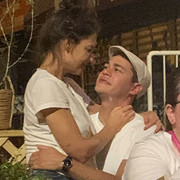 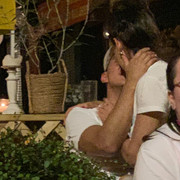 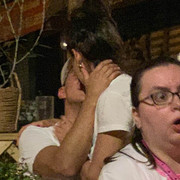 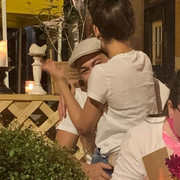 Katie Holmes is in the throes of a passionate new romance with restaurateur Emilio Vitolo Jr, exclusive DailyMail.com pictures confirm.

The 41-year-old actress was spotted sitting on the 33-year-old chef's lap as they dined at Peasant Restaurant in Manhattan on Sunday night. - Holmes, who was previously married to actor Tom Cruise, passionately locked lips with Vitolo at their table.

The "Dawson's Creek" star had her hair tied up into a messy bun and she wore a plain white tee.

She paired her casual top with a pair of denim jeans and she looked noticeably makeup-free.

Emilio gazed lovingly at Katie, while donning a beige newsboy hat and a v-neck shirt.

The pair bursted out into uncontainable laughter as they cozied up to one another at the quaint joint.

Holmes and Vitolo sparked romance rumors on September 1 during a dinner date at a SoHo eatery.

Emilio, whose father Emilio Vitolo Sr. has owned Emilio's Ballato in SoHo since the early 90s, had his arms wrapped around Katie.

Emilio's Ballato is a favorite of the celeb set, with fans like Whoopi Goldberg, Joe Jonas, Justin Bieber, Rihanna and Bradley Cooper regularly stopping by for a bite.

Monday night's display comes as a shock to many being that Holmes is notoriously private about her personal life.

The "Logan Lucky" actress was wed to Tom Cruise from 2006 until their divorce in 2012. They first began dating in 2005 and by June of that year Katie converted to Tom's religion of Scientology and accepted his marriage proposal.

As if things between the pair did not move fast enough, Katie revealed in October that she was pregnant with the couple's first and only child, daughter Suri, who is now 14-years-old.

Suri was born in April of 2006 and by November of that year, Tom and Katie became husband and wife during a lavish ceremony held in Italy.

After filing for divorce from Tom in 2012, Katie reportedly feared the actor and his association with the Church of Scientology. Despite the eeriness of the organization, Katie was awarded full custody of Suri, who currently resides with her in NYC.

In March of this year, Katie opened up about her complicated marriage to the devout Scientologist in an interview with InStyle magazine. 'That time was intense. It was a lot of attention, and I had a little child on top of it,' she recalled.