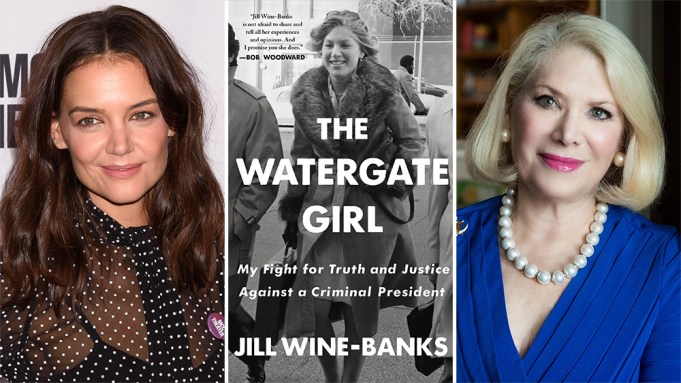 EXCLUSIVE: Katie Holmes, through her Noelle Productions banner, has optioned The Watergate Girl: My Fight For Truth and Justice Against A Criminal President, the best-selling autobiography by former Watergate prosecutor Jill Wine-Banks. Holmes will star and produce the project, which is planned as a feature adaptation.

Released in February 2020 via Henry Holt and Company, The Watergate Girl opens a window on a troubled time in American history. It’s also the story of a young woman who sought to make her professional mark while trapped in a failing marriage, buffeted by sexist preconceptions, and harboring secrets of her own all during a frightening time. Her house was burgled, her phones were tapped and even her office trash was rifled through.

Wine-Banks, a current MSNBC legal analyst, began her career as an organized crime prosecutor at the U.S. Department of Justice which led to her selection as one of three assistant Watergate special prosecutors in the obstruction of justice trial against President Nixon’s top aides.

At the time, the barley 30-year-old Jill Wine Volner (as she was then known) was the only woman on the team that prosecuted the highest-ranking White House officials. Called “the mini-skirted lawyer” by the press, she fought the casual sexism of the day to receive the respect accorded her male counterparts— and prevailed.

“I’m excited to be working with Katie Holmes and am both honored and humbled to have my experience as the only woman on the Watergate trial team shared on the big screen,” said Wine-Banks, who has also served as general counsel of the U.S. Army and EVP and COO of the American Bar Association. “Though it was almost 50 years ago, the story of our investigation and trial remain compelling and relevant to current events and the sexism reflected in my story reverberates today. I hope this film opens up more dialogue around the challenges still facing professional women.”

“I was drawn to this story because it is as relevant today as it was then,” said Holmes. “Women are constantly trying to break through the glass ceiling in the male workplace and this woman singlehandedly helped reshape the Watergate trial. I am constantly inspired by these strong female protagonists, and it is a world I will always want to explore.”

The Gotham Group negotiated the deal on behalf of Wine-Bank.