And Foxx even matched his shoes to his date's dress! 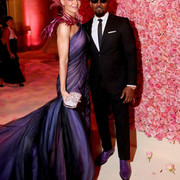 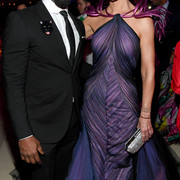 It’s a match made in Met Gala heaven!

Jamie Foxx and Katie Holmes made their public debut as a couple at the Metropolitan Museum of Art’s 2019 Costume Institute Gala.

While they didn’t hit the red carpet together, the couple posed for photos inside the event in front of the flower wall and in the main Met hall, looking cozy with their hands around one another as they stopped for photographers.

Holmes wore a custom Zac Posen gown, made of 300 yards of multi-layered hand sewn colored tulle, and Lorraine Schwartz jewelry. The gown also featured 3D detailing including a collaboration between Zac Posen x GE Additive x Protolabs, which designed the palm leaves collar accessory. The pearlescent purple palm leaves draped over Holmes’ shoulders and were attached to the gown at the neckline. The printing and finish of the palm leaves took more than 56 hours, according to a rep for Zac Posen.

A source recently told PEOPLE that the Oscar winner, 51, and the 40-year-old actress — whose private romance dates back to 2013 — try to make time for each other as much as possible.

“When they can spend time together, they do. When they’re busy and they can’t, they don’t. They are two adults who enjoy each other’s company and have for a long time,” the insider said.

Foxx and Holmes have been taking their relationship a bit more public in recent months, even wrapping up 2018 with a Dec. 28 yacht outing in Miami, followed by a jet ski trip the next day.

Back in January, a source said the couple has found a balance between their relationship and busy careers.

“Katie and Jamie see each other as frequently as they can,” the source shared. “They have known each other for years, and both turned out to be great parents, so they also have that in common. They are dedicated to their careers. Plus they give each other space.”