Katie Holmes to UT grads: 'You deserve joy. Not in 10 years, but now.'


Katie Holmes is presented with the Honorary Degree of Doctor of Humane Letters and delivers
University of Toledo 2019 Spring Undergraduate Commencement speech. May 4, 2019 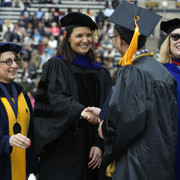 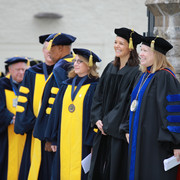 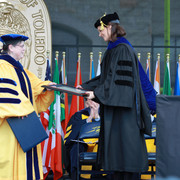 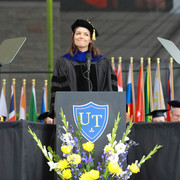 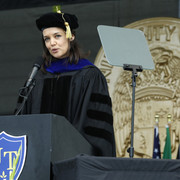 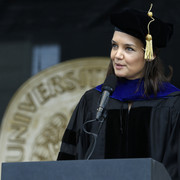 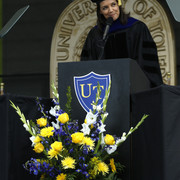 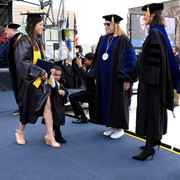 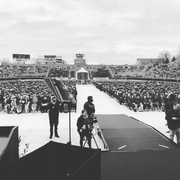 Katie Holmes presented a clear message to graduating students during the 2019 spring commencement Saturday morning at the University of Toledo: Achievements can be made through hard work and support.

“Do the best you can with what you have to work with, because you all have a lot to work with more than you may know,” the Toledo native told the students in caps and gowns on the turf at the university’s Glass Bowl. “You’ve all been through a lot, you’ve had your own wild and precious lives, and may have been kicked around a little and learned how tough life can be.”

Ms. Holmes, who received an honorary degree of humane letters while on stage just before her 15-minute speech, explained moments in her life when she was able to overcome struggles because she had support.

She started with being in eighth grade on the basketball team at Christ The King, of which her father was the coach who told the team not to be afraid during the championship game when the odds were against them. She also spoke about moving to Los Angeles at the age of 16 for auditions.

She described being in a grocery store with many actors and actresses asking what her previous experience was — and she had none. Yet, her mother was there for support.

“My mom saw the look on my face, which was pretty deflated, and she ushered me out of there and said, well, we’re not going back there because, Kate, don’t worry. You have nothing to be ashamed about,” she said. “You are you and you are who you are and you are from where you’re from. Go in, have fun, and be yourself. The next audition I had, I nailed.”

She talked about hosting Saturday Night Live at the age of 21, feeling nervous and scared while in her dressing room before the show started. Again, she had family support.

“My dad came to my dressing room about five minutes before I went on and he came up to me and said, Kate, just have fun, be yourself. They’re lucky to have you,” she said. “And in that moment I wasn’t scared.”

The stadium, which has a 26,000-seat capacity, sat underneath an overcast sky for the length of the two-and-a-half-hour-long commencement after local forecasts predicted rain. Cheers from families could be heard throughout the stands in attempts to get their graduate’s attention from the turf.

Laughter could also be heard from students now and then when Ms. Holmes gave life tips, like when she said not to use a fake ID when purchasing wine and decide to pay with a check.

More tips included: Be aware of finances; know what to do during a natural disaster; and continue their education on their own terms.

Ms. Holmes also used part of her speech to talk about the importance of women’s rights.

“Women need each other now more than ever to continue the fight over equal pay, mutual respect and the war against abuse and mistreatment,” she said. “There are women half the world away going through the worst oppression you can imagine and there are women two seats away from you who could probably use a listening ear right now.”

“Toward the end when she said if you needed a sign this is your moment and that it’s kind of scary from this point on and you are the one who decides what you’re going to do, that’s a huge responsibility and that is scary. I think that was amazing and kind of hit home when she said that.”

Alexandria Burk, who also received a psychology degree, said she felt like the university choosing Ms. Holmes to speak was generic.

Spencer McQuestion, who graduated with a degree in electrical engineering technology, said he could relate with Ms. Holmes’ message of hard work ethic, especially because of the Toledo native born and raised in the city.

“She took what she had and decided to follow her career and despite having her troubles she had the people to support her and she just kept going,” Mr. McQuestion said. “It inspired me that no matter what’s going on in my life, no matter how many no’s I get in jobs and internships, it’s always just keep trying and having that positive attitude.”

Ms. Holmes ended her speech by explaining her experience moving from Toledo to North Carolina at age 18 to start shooting Dawson’s Creek. She was among actors and actresses who were unknown in the industry and working for a brand new network.

The odds were against them, she said, but it was the support she had that led to success.

“If you’re waiting for a sign, this is it,” she said. “I’m going to be that basketball coach and that producer and that big brother to you all and tell you that you are the person who is going to go out there and make things happen. That’s a terrifying and amazing responsibility but you deserve joy. Not in 10 years, but now.”

Both the undergraduate and graduate ceremonies were hosted at the Glass Bowl Saturday — the former at 10 a.m., the latter at 3 p.m.

An indoor ceremony for graduates of UT’s College of Law is planned for 1 p.m. Sunday in the Student Union Auditorium.

As with university policy, Ms. Holmes received no financial compensation for preparing and delivering the commencement address.